Back to News
Oct
7
2019
Israel Morales leads sustainability programs at JV Smith Cos.

Israel Morales has been promoted to executive director of sustainable operations for JV Smith Cos.

Morales previously was general manager of JV Farms Organic, Soledad, Calif. He’s been a farmer for more than 45 years, according to a news release, and more than 30 of those years has been in organic farming.

The Organic Trade Association has named him Organic Farmer of Year, and he’s scheduled to receive that honor in September.

His new role includes overseeing all sustainability practices at the JV Smith Cos., but he’ll also be a spokesperson, sharing knowledge with other produce industry companies.

“I believe that sharing what I’ve learned with the industry, with schools, with future generations is not only my honor, but my responsibility,” Morales said in the release. “The future generations need to be well informed about initiatives for food safety, crop rotation and production and responsible sustainability.”

“We couldn’t be prouder to share his vision and his experience to the industry as we all move forward collectively to make this a better place for future generations,” Smith said in the release. 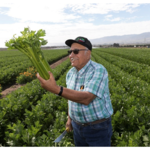