Entrepreneurs, venture capitalists, and moneyed folks who want to be a player in the effort to feed the world have discovered the $8 trillion agriculture industry.

Forbes magazine noticed the trend in a 2016 article, in which it reported “technological innovation is inevitable, with many subsectors for inventors, investors, farmers, and industry stakeholders to navigate.”

The magazine categorized the technology subsectors as on-the-farm inputs (soil amendments, seeds, genetics, feed, fertilizers, and pesticides) and the field of precision agriculture — big data, smart equipment, sensors, and software via helpers like drones, and robotics, and new business models such as cellular or controlled environment ag.

Traditionally, the best way to get the most honest answers about a product is to ask someone who uses it. So we did, several times, on several subjects.

Richard Smith: We’re in the Model-T Stage of Tech

“Spray mechanisms with herbicide get rid of the unwanted and leave the keeper plants alone,” he says. “They can also put on a second manifold that will spray fungicides or insecticides on the keepers, so it’s two operations in one pass that lowers cost because of the ultra-precise use of compound.”

Machines with vision, cameras, and computers are becoming more prevalent in the field in an effort to make up for less hand labor.

“Think back 100 years ago about how automobiles developed,” says Smith. “This is kind of the Model T phase for some of these machines that inspect and reject. Because spinach is mechanically harvested, they look down on a spinach bed, searching for yellowing leaves or bird contamination, and little plates come out and push the bad leaves down so the harvester cuts only the good stuff.”

Other advancements are coming under the umbrella of multiple missions, two or three things at the same time. A good example is a plant tape machine with drip irrigation that allows mechanical planting and initial watering of the field.

“You’re starting to see growers adapt things that aren’t so obvious because there’s no fancy machine in the field, but it’s helping growers deal with the lack of labor factor,” Smith says.

There needs to be more interest from the big boys to move the technology curve along faster, says Bart Walker, President of Pacific Ag Rentals in Salinas, CA.

“I’m seeing increased interest and investment from Microsoft, Google, Dell, and others who are starting to come in and have an agricultural deck of products they want to start pushing into agriculture. Everybody wants data now, and data is money. Get it, scrub it, and sell it. We just need business suits to talk to bib overalls,” he says.

Walker thinks many of the current offerings aren’t practical.

“Right now you need an IT professor from MIT to run some of the newer technology, although it’s starting to get more simplified into dashboard operation as everybody tries to go deep into neural learning, i.e., knowing the difference between a plant and a weed,” he says.

But that’s about to change, he says.

“There’s a farming skill set change on the horizon as traditional farming backgrounds incorporate technology to become the connected farm of the future,” he says.

Another advancement involves rate control technology applications. Rate controllers are computers attached to sprayers or application equipment that automatically compensate for any variable to maintain a standard rate of application.

Walker, who sells and rents farm field equipment from Salinas, the self-proclaimed Salad Bowl of the World, sees input technologies like variable rate application as the next big technology wave.

“We’re not there yet, although we’re getting better. Carpet bombing worked well in World War II, but instead of dumping hundreds of pounds of nitrogen on soil that may not need it, our next push is to figure out what we need and where and how to put it there,” he says.

Matt McGuire: We Trial and Adopt the Most Promising Tech

Matt McGuire of JV Smith Companies oversees growing operations in Mexico, Arizona, California, and Colorado, a total of more than 25,000 crop acres with differing crops, from lettuce and durham wheat to broccoli and Sudan grass.

“You have different soil conditions and weed spectrums in all these locations. Like seed has to be planted deeper in Colorado because of lighter soil and gusty winds, and that creates slightly different problems in how you use your mechanisms,” he says.

“Automated thinners have become more widely adopted over the last few years. We have four of them running now, and it’s decreasing our need for field labor. That’s a biggie going forward,” McGuire says.

McGuire is keeping tabs on which equipment European growers are using, and he’s seeing machinery he thinks will be the next big thing to hit American fields.

“Just around the corner are cultivators with working prototype units already in Europe. [These units have] photo eyes and technology algorithms, artificial intelligence to recognize what a plant looks like, and different elimination mechanisms — seek-and-spray with a dot matrix unit that shoots out a drop of Roundup on the weed or little hand knives.”

“We’ve played with drones but haven’t been able to get them to give us the kind of information we need because they can’t see an early outbreak of mildew starting to form on the bottom of a head of lettuce. We still need boots on the ground for most of our growing operations,” he says.

Another experimental area is genomics.

“We’re also working with a Silicon Valley genomics company that does soil fungi and bacteria testing, working to develop DNA fingerprints for the specific pathogens we have to regularly deal with.”

Paul Brierley: Tech Is a Boost for Diverse Operations

Paul Brierley, Director of the Yuma Center of Excellence for Desert Agriculture, cites the challenges of finding field labor as one of the reasons that automation is taking off in leaps and bounds.

“GPS allows geo-reference mapping and then sensors can do moisture imaging and temperature and soil condition and salinity control, all these things can be put together,” he says. “We’re getting to where we can do this precision agriculture concept on a pretty fine scale.”

Right now, Brierley says, we’re swimming in a world of raw data. If we can tame that input instead of it overwhelming us, and we can get it to the right person in the right form at the right time, we’ll make more productive decisions.

“Farmers have a lot of knowledge in their heads about their land and their crops and what works well where, and if we can put all that in a database and combine it with real-time sensors and predictive analytics on things like weather, we become not just precision agriculture, but prescription agriculture, knowing what to do based on all the data input we have — and we’re starting to head in that direction.”

Nate Dorsey is an agronomist representing John Deere in Yuma County, AZ, serving the southwest region of the state.

“The biggest thing I’m seeing is automated thinners using robotics and artificial intelligence to thin row lettuce in Yuma, although the units can be customized for just about any crop,” he says.

Thinning crops like lettuce at the seedling stage requires large crews. With such an obvious payback on labor, the industry embraced the automated machines years ago.

“If you employ a crew of 20 at $15 an hour, that translates to about $3,000 or more a day, and typically you’ll employ several of these crews all season long. A hand crew can cover 2,000 to 3,000 acres a season, while a machine thinner could conceivably cover 10,000 acres, a five-fold increase with just one machine,” Dorsey says.

Sure, they’re expensive, with an average cost between $350,000 to $400,000. But Dorsey says the labor savings for medium to large farms can pay for the machine in a single season. 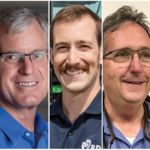